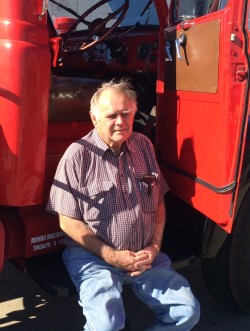 In 1959, Ted Phelan, well known Charleville sheep farmer, bought a brand new International R90 prime mover in Brisbane. The truck was to be used for stock transport and pull three 32 foot two-deck sheep trays. Back then you could only buy the International with a big thirsty petrol engine. Les Palmer, the original driver, delivered the new truck down the road to Cummins Diesel Sales & Service (then a Blackwood Hodge company) for an upgrade. CDS&S pulled out the petrol engine and replaced it with a new and powerful Cummins C464-160 HP Diesel engine.
In 2003, 44 years later, the lovely old truck was found in a field on a property at Wyandra south of Charleville by Bill Brooks the local mailman. The old girl had been abandoned and had even been underwater in an earlier flood. But today it is now beautifully restored – a credit to its new owner Jim Williamson.

Brisbane born and bred earthmoving specialist Jim Williamson bought the truck and had it shipped to Brisbane by Bill Brook’s (Brooks Transport) nephew. Says Bill, “We stripped it down to the last bolt and it took us 20 months to rebuild. It’s all original. The bulbar and the hungry board were retained. They were originally built locally and are very distinctive. We kept the original colour scheme, so often Charleville locals will recognise her. “

“I noticed a misfire in the engine a few days ago and asked Torquepower to have a look at it. They quickly found a problem with the cylinder head. I brought her to Torquepower because they are Cummins specialists. You don’t go to people who don’t know, you need to have the knowledge! “