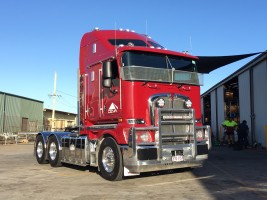 “The previous truck got to a million kilometres and still powered well, because I always come to Torquepower. “

Mick Sauer’s new K200 is a thing of beauty . Last October, his previous rig burnt to the ground in a major highway accident just out of Sydney, and has just been replaced with a good-looking red Kenworth K200 with an E5 600 HP Cummins engine. “ I chose the 600HP engine because its comfortable on the job, moves well even under a big load. The previous truck got to a million kilometres and still powered well, because I always come to Torquepower. “

Mick’s company Wemline is a car-carrier for Ceva. Typically he picks up cars depot to depot; Brisbane to Sydney and return, and occasionally from Melbourne. “ I like driving Cummins gear. For 22 years, I have been a Cummins man, and all the blokes I’ve worked for have Cummins. Even my old man used Cummins gear hauling livestock out of Glastonbury near Gympie. I grew up there. Dad taught me how to drive tractors, and pretty much everything else.”

”Home now is at Munruben, an acre. I have two boys turning 16 and 14 this year – I’ve told them they are not allowed to come into the business. Driving can be hard on family, and I don’t always get to see what they are doing. The eldest boy wants to go into the police force, the youngest is torn between the dog squad and being a Chef. “

Last year’s highway fire near Sydney made all the news networks. Mick takes up the story. “I came over the crest of a hill and saw that the traffic was at a complete standstill. The truck in front of me had locked up all the wheels up trying to stop, so I threw the skids out. I knew my rig wasn’t going to stop in time, so I thought I’ll try and go around, there was no one in the lane beside me. I managed to clear his rig except I caught the very end of his trailer, he only lost an indicator and was a bit bent. My truck burst into flames when the battery box was punctured and sparks from the ruptured batteries ignited the fuel tanks. “

“I had probably 30 seconds to pull up and get out. I wasn’t frightened, I knew I just needed to get out, and try and help the bloke behind me to stop the traffic . I had to fly home. No problem ringing the insurance company, but that was the hardest call I’ve ever had to make to my wife, when I explaining the severity of the accident . I worried it would confirm all her fears. She still worries now, but my old man taught me well – if anything goes wrong, get right back on the horse.”

“I was driving again that night , I had to have the compulsory counselling, but after one session the therapist agreed I was functional because of what my old man taught me. “

“When I’m not driving, I like to take the boys to school, and to football training – one to Rugby League, the other to Logan Village soccer training; or we go to the coast for a spot of beach fishing. I do the cooking at home, I can work out any recipe, it won’t beat me.. nothing beats me . In the future I’m a bit concerned about the Union Safe Rates, so I’ll keep an eye on that. I also watch League. North Queensland Cowboys is my team – my cowboy mascot got burnt in the truck, as it was the weekend of the end of the Grand Final…but I’ve replaced it already .”